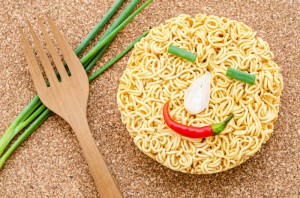 Japan is home to a lot of inventions and innovations. Most of them are still being used in modern-day society. But nothing would top the impact of instant ramen noodles. It’s amazing and humble beginnings almost sounds like fiction, but we’re here to tell everyone everything about Japan’s culinary wonder.

Momofuku Ando is renowned as a hero because of his contributions to post-war Japan. Ando singlehandedly developed and unlocked the formula for the instant ramen noodles.

Roaming the scenes of post-war Japan, Ando thought of something that would change the world. He thought of using ramen to solve the hunger problems that Japan faced after the war. Little did he know that this idea would last an entire lifetime, feeding not only Japanese people but also people he hasn’t even met around the world.

The formula that he had stumbled upon to create a long-lasting noodle is with the help of his wife. He fried his noodles and waited for things to unfold. It turns out that frying the noodles would also be the key to its preservation.

Until now, this is still the process that different instant noodle manufacturers use.

Instant noodles was luxury back then

It turns out that the cheap noodles that we know today isn’t priced the same decades ago. People in Japan sees instant noodles a luxury because not anyone can afford it. It was also implied that the instant noodles can cost 5 timed a freshly served noodles, and could go even higher than that.

The instant ramen noodles transcended humanity as it was taken into space. Referred to as space ram, Soichi Noguchi, a space astronaut was the first one to experience eating noodles outer space. This feat is easily the greatest one that Momofuku Ando has ever achieved in his lifetime.

A noodle pack is loaded with sodium, and if you only eat one noodle in a day, you’re safe. A pack of noodles doesn’t exceed the limit of sodium limit intake of the body.

It is not suggested to escalate things even higher by eating more than one pack a day since it might impose health risks that may be irreversible in the long run.

Instant noodles are known to be flexible, and because of its formula and composition, its shelf life is a lot longer. This makes instant noodles a great contingency food, those types that you can eat under any circumstances. Energy kits sometimes include them alongside canned foods.