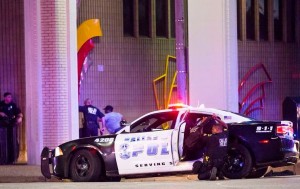 Authorities confirmed that a single person was responsible for the killing of five Dallas police officers during the Black Lives Matter protest on the evening of July 7.

The suspect was Micah Xavier Johnson who targeted white police officers only using an AR-15 style rifle during the Thursday protest in Dallas. There were footages that emerged and showed how at point blank range Johnson executed a police officer. It also showed how he executed another officer who was live streaming the shocking and unexpected scene. The killing spree was stopped when he was killed after a robot carrying a bomb was detonated near him. His tragic death immediately ended the massacre.

Johnson was only 25 years old and was a veteran of the US army. In particular, he was sent to war in Afghanistan and had served for the US Army for several years. According to police authorities, he carried out the well-planned shooting using his military training. The killing of police officers has made and kept tensions very high among the ranks of police authorities and officers across the United States.

Two days ago, authorities revealed the first picture of sniper Micah X. Johnson as the primary suspect. They have also considered the possibility of a ‘lone gunman’ killing the five officers. Hours later, the names of the killed officers were verified. The names of the victims are Police Officer Brent Thompson, 43, Officer Patrick Zamarripa, 43, Sgt. Michael J. Smith, 55, Officer Michael Krol, 40, and Senior Cpl. Lorne Ahrens, 48. One civilian was wounded and another seven were injured.

Yesterday, it was confirmed that the killing incident was solely done by Johnson. There were also three other people who got arrested. After questioning the other suspects, the officials, however, later confirmed that Johnson was alone in killing the police officers. It negated the early reports that there were multiple suspects and snipers responsible for the shooting. Reports also revealed that he has no records of criminal or terrorist activities.

Clearly, the shooting is related to the undying and actually increasing tension between races. Racial tensions across the country have been continuously rising after a small number of unarmed black men were killed in a shooting spree. The killing was in response to violence that around 800 Dallas protesters are experiencing from the police. There were also reports that police from other parts of the country such as Missouri and Georgia are also targeted.