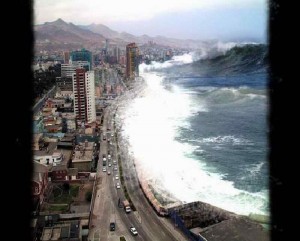 A series of strong killer waves happened in the year 2004 in most Asian countries particularly Indonesia. On December 6, 2004, the Indian Ocean tsunami, as it was called, had released its devastating energy of about 23,000 tons of force which is somewhat similar to a Hiroshima type of atomic bomb, as described by the U. S. Geological Survey (USGS).

Considered as one of the  most devastating tsunami, it has made the area shook fiercely as if there was something powerful below the ground and let loose series of killer waves from the Indian Ocean to strike inland with the speed of a flying jet.

Why tsunami happens? According to the USGS, the earthquake was the result of the descending portion of the Earth’s crust known as Indian plate beneath the section of Burma plate. This happens when one plate pushes against the other until something has to give up. The consequence to this was the  estimated split of more than 600 miles or 1,000 kilometers long. This event dislocated the seafloor above the split by possibly 10 meters horizontally and several meters vertically. Trillions tons of stones moved and caused the planet to tremble. The earthquake measured  9.0 in magnitude happened beneath the Indian Ocean near the  west coast of Indonesian island in Sumatra. The tremor sent a very powerful shock waves over the area and displaced large amount of water from the ocean and caused damages in the coastal lands.

The killer waves speeding from the earthquake point smashed into inland and affected more than 11 Indian Ocean countries, grasping and drowning people out to the sea and destroying various properties from Africa up to Thailand.

According to the USGS report, the Indian Ocean tsunami traveled 3, 000 miles into Africa. Its gigantic power killed more than 150,000 lives and destroyed many properties and facilities leaving millions of the population in 11 countries helpless and homeless.