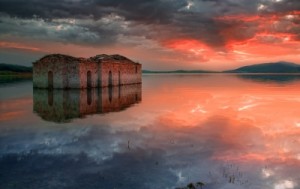 Weather patterns that cause higher or lower than average surface temperatures in the Pacific are referred to as the El Niño/La Niña phenomenon.  These occurrences can be felt during or approaching the month of December, the month believed to be the time when Jesus Christ was born. The anglicized form of El Niño, “the small boy” refers back to the baby Jesus, although it has nothing to do with anything religious or superstitious beliefs. The effects of La Niña is exactly the opposite, hence the name which means “the small girl” with reference to its “male” counterpart.

This natural occurrence is the result of the interaction of surface temperatures and air pressure. Large bodies of water like the Pacific have layers of warm and cool waters known as the thermocline. These two layers of water oscillate like a seesaw creating more volume of warm water on one end and cooler on the other end. The air moves to the direction of lower pressure, which, in this case occurs on the warm waters. As a result, heavy downpours are experienced on one side while the opposite side suffers extremely dry weather. This is known as the La Niña condition.

After a certain amount of time, the warm waters move across the ocean causing the cool layers to be directly underneath – warm water above and cool water below. Consequently, wind direction stops or reverses to the opposite direction resulting in large quantities of water moving to the atmosphere. This higher-than-normal surface temperature is one of the telling signs of El Niño phenomenon. Flashfloods, storms, and other weather disturbances are dangerous byproducts of this anomaly.

Countries  in South America, Australia, Southeast Asia, and Africa are the ones that are greatly affected by this El Niño Southern Oscillation (ENSO). Scarcity of fish and other marine life on the surface waters is a problem to countries that depend on them for living since warm water inhibits the growth of natural food for fishes. These countries will also experience unusually high volume of rainfall and often violent thunderstorms.