Facebook Launches Dating Feature in the US: Here’s What You Need to Know 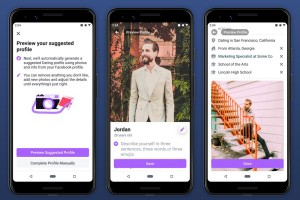 Facebook takes connecting people into a whole new level as it launches a dating service. But, is it safe? It turns out, it seems it is and more updates are expected to come.

On Thursday, Facebook announced that it is launching a dating feature wherein you can’t just get to connect with your friends, family, and colleagues, but you can also get to find “the one.” For starters, the dating feature lives within the existing Facebook app. However, to use it, you are required to set up a separate profile but the information carried over is your age and name. The service will then present you potential matches based on your indicated preferences, location, and other factors. In addition to that, you can souse to match with people who attend the same Facebook groups or events. The only thing that it won’t show you are your Facebook friends.

Moreover, the social media giant has also integrated the dating feature into Instagram in hopes to create a more authentic and dynamic experience. With this, you will have the opportunity to feature your Instagram posts in their Dating profiles.

However, many still find it skeptical. But the social media giant said it has imposed several new privacy and security within the service.

Also, unlike other dating apps, with this new Facebook feature, you can turn off matching with your friends of friends if you want to date outside your network. It is also said to help LGBTQ+ people who are not out to their communities. On top of that, you can block people from seeing your Facebook Dating profile even if you still want them to have access to your Instagram and Facebook accounts.

This is may be the first time the social media platform has launched such feature in the US but Facebook has already launched it in some countries earlier this year such the Philippines, Thailand, Canada, Argentina, Mexico, and Colombia and has been receiving several positive feedback. Check it out now and who knows, this might be your lucky day in finding the perfect match for you.