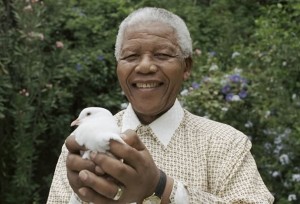 “I am not a messiah but an ordinary man who had become a leader because of extraordinary circumstances.” – First speech upon his release, Cape Town, 1990

Nelson Mandela, South Africa’s first democratically elected black president,  passed away yesterday at the age of 95 after a long battle with illness.

Affectionately known to his country as Madiba, his death is being mourned by the world. A state funeral will be held to be attended by world leaders.  The 12-day memorial is being prepared and the royalty, foreign dignitaries and celebrities are expected to pay tribute to “history’s greatest peace icon”.

Mr. Mandela is respected not only by his supporters but by many people around the world, from all walks of life, who have considered him as an inspiration and hero of peace.

He is anti-apartheid as well as a politician and became the first black President of South Africa for five years (1994 – 1999). In his government, it is noted how he focused on dismantling the apartheid where racial discrimination was demolished and raising equality among the people became his goal. In addition to becoming a president, he was also the Secretary General of the Non-Aligned Movement.

Nelson Mandela received 250 awards which included the 1993 Nobel Peace Prize.  The people of South Africa have developed a deep love for him and even called him “Father of the Nation”.  He is deeply respected and so dear to his fellow South Africans that losing him seems unimaginable.

“Madiba transformed South Africa and moved all of us. His journey from a prisoner to a president embodied the promise that humans can transform for the better.”  ~ US President Barack Obama

“Nelson Mandela was a hero of our time.” ~ UK Prime Minister David Cameron