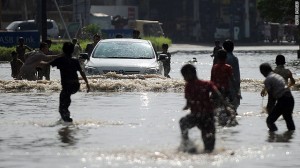 More than 200 people have been killed in southeastern Pakistan as heavy rains continue to cause flooding in the area. The United Nations described the devastating floods as the greatest humanitarian crisis ever recorded in modern history with million homes and properties damaged and destroyed.

The spokesperson of the UN office for the Coordination of Humanitarian Affairs considered these floods in Pakistan as more than worse compared to the tsunami and the 2005 Pakistan and Haiti earthquakes because of the amount of destruction.  There are about 200,000 people who have been displaced and in need of assistance.  There are 39 affected areas including Swat Valley in the north and Sindh in the south where more than 600, 000 of people have to be rescued.

Zafar Qadir, head of the National Disaster Management Authority in Islamabad, said during the press conference that the southern area of Sindh is a flood-prone area where most of the heavy rains come anytime.  It is the worst crisis that ever happened to Sindh, compared to the calamities last year.  The natural disaster has already raged up to 4.1 million acres of properties which include 1.7 million acres of crops in the province, 64, 000 livestock and 700, 000 houses totally vanished.

Prime Minister Yousof Gilana deployed his special parliamentary committee to coordinate with the relief operations to solve the huge problems. The committee has provided 80, 000 food packages and 45, 000 tents for the affected families and promised to give more 10, 000 tents in the coming days.

The rescue operations are quite a tough job.  Helicopters were unable to reach the most affected areas in Sindh because of the heavy rains and huge floods.

However, regardless of how devastating the floods in Pakistan were for over a month, the people continue to move forward hoping for the international aids during this time of catastrophe.