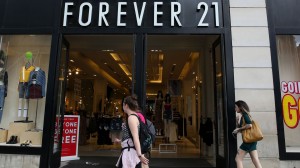 A sad news for fashionistas who love Forever 21: the fashion chain has now joined the growing list of physical stores who have taken a hit from the fierce e-commerce competition and has filed for bankruptcy. However, it’s not all bad news and there’s nothing to worry about too much as the fast fashion retailer will continue to operate through some of its branches, including its 15 stores across the Philippines.

Since it launched in 1984, Forever 21 has been one of the favorite go-to brands of many teen shoppers because of the affordable yet stylish clothing and accessories that it has. However, with the advancements in technology and other factors, low-price fashion chain fell victim to the changing consumer tastes and its own rapid expansion. And on Sunday, it officially filed for Chapter 11 bankruptcy protection to restructure its business.

In addition to that, according to the court filing in the US Bankruptcy Court for the District of Delaware, it lists both liabilities and assets in the range of $1 to $10 billion.

Moreover, Forever 21 said it is planning to overhaul its global business and is set to close between 300 to 350 stores, including nearly 200 of its branches in the United States. Also, the fashion chain also plans to “exit most of its international locations” Europe, as well as in Asia. This comes quite a sad news for its loyal consumers.

But fret not if you’re a fan of this fashion retailer as the company said that its stores in the Philippines will not be affected by this. In a statement released by SM Investments Corporation, the fast-fashion brand said it is “business as usual for Forever 21 Philippines,” indicating that the brand will still carry on with both of its online and physical operations in the country.

Meanwhile, SM Retail President Chito Manalo Jr. added that the brand’s filing of bankruptcy has “no effect” on Forever 21’s Philippine operations, which “continues to be one of the stronger global operations.”

Manalo also said that they will still continue offering “up-to-date merchandise.” In fact, he shared that they are also gearing up their marketing investments for the upcoming Christmas season.