Impeachment Case On The Way Soon To Senate According To Pelosi 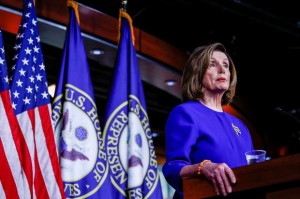 Two articles are on hold by House Speaker Nancy Pelosi about U.S. President Donald Trump’s impeachment. According to sources, Pelosi is doing this to see how the Republicans act for the trial.

Pelosi told a reporter on Wednesday that she’s not holding on to the articles indefinitely, she’s not just ready to release it. “I’ll send them over when I’m ready. That will probably be soon.” Pelosi said.

Pelosi also denies any hints regarding the time she will be sending out the two articles against Trump. According to her, she wants to know what Republicans are about to do.

There is a procedural approach to how these articles are supposed to be passed and processed. The republicans then saw this and criticized Pelosi’s actions.

Mitch McConnell, the Senate Majority Leader urged Pelosi to drop her articles because of his plans to approve the trials. The democrats won’t be helping the senate trials according to McConnell.

John Bolton, a former national security adviser and White House chief of staff Mick Mulvaney alongside two others are selected as a witness for the trial.

The two Pelosi articles are made in order to pressure McConnell to put witnesses on the rules of the whole process.

McConnell stated that the way or approach of Trump’s trial is similar to Bill Clinton’s trial. Yet, this decision caused an uproar to democrats because the comparison of the two presidents is unfair and is very different from each other. According to them, Bill Clinton’s trial had the senate to call over past witnesses that have already testified. The democrats then want to have witnesses that are blocked by the Trump administration.

Pelosi strongly shut down the claim that this current impeachment trial is like that of Clinton’s. “We will not let them say this is just like Clinton. Fair is fair — it is not. Documentation, facts, witnesses, truth. That’s what they’re afraid of.”

Some Republican Senate moderates showed support on this idea that they want to hear more from the witnesses. But their decisions finally settled to what McConnell has thought of.

McConnell is firm about his decision which leads to very heavy pressure on Pelosi’s back.