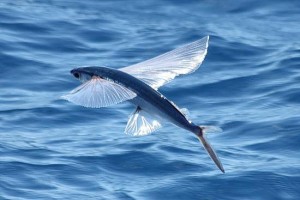 You’ve probably heard someone talk of red herring when they mean something that misleads people. But did you know that no such species of fish exist? In this article, you’ll know some species of fish that do exist. You’ll also know some interesting facts about fishes you’re already familiar with.

Flying Fish. “A fish may love a bird, but where would they live?” Maybe be that’s the reason why some fish would rather fly than swim. Flying fish can coast above the waters for more than 400 yards in a single flight using their “wings” – modified fins used for swimming and gliding. Its tail helps during take-off and propulsion in midflight.

Goldfish. Chinese people were among the first to raise these fishes as pets – over a thousand years ago! Although goldfish is a common household pet, there’s something uncommon about this kind of fish. For example, they don’t have stomachs. Some can live longer than our good old house pets. Tish was the oldest to have ever lived. He died in 1999 in North Yorkshire, UK at the age of 43.

Shark. Swim or die. Sharks move around 24/7 to take in oxygen from the water or they will die of asphyxiation. That’s because they only get 80 percent from 1 percent of oxygen in water. Sharks are excellent swimmers. The Mako shark is has been noted for its swimming ability of up to 60 miles per hour. Sharks will eat just about anything – a nail, a bottle of wine, a torpedo – except a puffer fish.

Mudskippers. For some fish, fins aren’t just for swimming. They also use them to “walk” their way on land, even climb trees. Mudskippers spend most of their time out of the water. That’s because they have gill cavities that can store water for long periods of time. But they don’t just breathe through their gills; mudskippers also breathe through their skins.

African Lungfish. Aside from whales, which are not at all fishes, the African lungfish is another sea creature that breathes air through its lungs. It has to surface out of the water every now and then or it will literally drown underwater. It can live for many months in burrows of hardened mud.

Its really fun learning about fishes, especially the ones we know little about. Some of them have around for millions of years, just waiting to be discovered out there in the deep.

5 thoughts on “Interesting Facts About Fish”