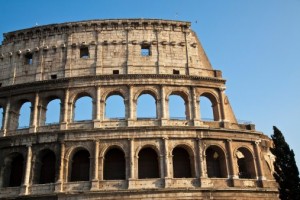 The Roman Empire is known for its glorious and remarkable empire that triumphed centuries ago. This ancient period holds so many secrets, and also known facts. We’re here to tell you some of them, and hopefully, you’ll learn more about the Roman Empire.

The Flavian Amphitheatre is one of the greatest time capsules we have of Ancient Rome. It is the venue for most of the gladiator battles which is also being attended by royalties and rich people of ancient Rome.

It turns out that it wasn’t the Flavian Amphitheatre and gladiator fighting is the most famous but it was the Circus Maximus and chariot racing. It was reported that approximately 50,000 people can fit inside the amphitheater, however, it is overshadowed by Circus Maximus and its ability to house more than 200,000 people.

No slaves have been used for rowing ships

The idea that every ancient roman should fight for their empire is called “civic militarism” and is the reason why slaves are absent on their warships.

Most contemporary literature claims and shows that slaves are used for this endeavor but it turns out that it is not.

It is stated that the average life expectancy in the ancient Roman Empire is 25. Although it is relatively low, there are still a lot of people who make it past the number. Some of them are even going on by a lot. Most of them live their life as long as some people of today’s generation.

Although ancient Rome produced great thinkers and philosophers, the majority of them disliked Philosophy. It is mostly because Greeks are the ones who coined the term and even invented it.

A lot of ancient Roman generals are depicted as those in victorious states and poses. The reality, however, is that the majority of them don’t step into the battlefield and fight. Most generals are the ones who give out orders and organize the military.

Combats are mostly engaged when there’s no choice anymore. Generals are deemed to fight, die, or surrender when they are about to lose a battle.

It has been a tradition or practice that emperors drink a portion of poisons that they know daily. These daily doses are said to combat actual poisons if ever it happens.

Mithridates the Great, King of Pontus was the first to take this routine. Emperors drink Mithridatium, the mixture of the poisons every day through a vessel that is a horn.

The great ancient Roman Empire is both profound and unusual. These things help to give light to some people who don’t know that much about them.