Interesting Facts about the Power of Doodling 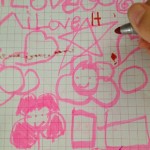 Doodling comes from the word doodle – a habit of unfocused or unconscious drawing a person makes while his attention is actually occupied by something else.

Doodles are generally simple and sometimes nonsense drawing that may have definite representational meaning.

Today, doodling is fondly considered as a national pastime mainly because it is done by a lot of people in different settings, but mostly in classrooms and offices.

Some examples of doodling are found in school notebooks, mostly in the margins, caused by a student who is either lacking interest in the class or day dreaming. Another example is when someone is having a long telephone conversation while a pen and paper are within range.

What’s Interesting About It?

For many people, it’s just a typical way of occupying themselves. Not a lot of them realize that doing it does actually provide some benefits.

Let’s find out how…

Admit it – you doodle perhaps in most instances where there is a chance to. Most of us could not deny it because we have developed the habit as students.

What you remember and what sticks in your mind are usually the things you doodle. For instance, it can be trees you always see outside your bedroom window, logo of your favorite baseball team, or the name of your favorite band, singer, or celebrity.

The products of doodling are the images and words coming out of your subconscious mind. Although they seem to be of no significance, they can actually be helping you in learning and grasping knowledge.

One health benefit of the habit, according to the Applied Cognitive Psychology study, is that doodling allows us to be able to effectively recall information hidden within our subconscious. The same research found out that the people subjected to the experiment that filled in shapes while listening to the phone had a better memory retention or recall percentage. The different is about thirty percent compared to those people who did not doodle.

Although not yet proven, the hypothesis is that the habit itself is effective in minimizing and combating daydreaming and absentmindedness.

But the power of doodling is not limited within the bounds of memory and recall alone. There is a widespread belief that it in fact corresponds to empowering one’s intellectual prowess. As it appears, someone who’s doodling seems to be distracted or plainly unfocused.

However, this is an activity that gives the brain an awkward but beneficial exercise of engagement and processing of complicated thoughts and ideas. Likewise, those who rely in their talents of creativity also use doodling to unlock that artistry and creativity in them.

Not convinced? Just ask some of the most notable people in history who themselves admit that the habit has in fact helped them focus, recall, and literally make use of their brains. The list includes the likes of Presidents Bill Clinton, Ronald Reagan, and Thomas Jefferson, as well as poet John Keats and mathematician Stanislaw Ulaw.

Therefore, if you have issues about paying attention and focus, doodling will help you deal with those issues. There’s really nothing wrong or you won’t lose anything if you start the developing the habit.