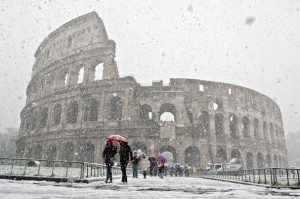 The Colosseum in Rome, which attracts millions of tourists every year, became a target of snowfall and has been reported to be partly damaged.   The historic attraction has been closed to visitors while inspections are being carried out by the authorities. The damage was due to the ice formation on its walls forcing off pieces of rock.

The worst still lingers in, as Europe faces a subzero temperature hitting at an unimaginable negative 40 degree Celsius in the Czech region. The dilemma has curtailed for over 3 weeks since the snowstorm blizzards from later days of January. The weather unexpectedly marveled several houses, which then forced drivers to isolate their vehicle along the highway as well as postponing errands of tourists in the freezing climate. Reporters from different weather news updated their current situation in each city.

It has been recorded that the total deaths as of February 9 this year is 460 and expect to increase slowly especially in Ukraine as many casualties were claimed from homeless locals. More than a thousand Ukranians were hospitalized ever since the cold weather persisted from negative16.6 degrees Celsius in the capital city. The country’s ministry of emergency and disaster unit has also confirmed that the Strait of Kerch linking Azov Sea to the Black Sea has froze leaving 126 boats trapped.

Further, the busiest waterway in Europe, the Danube has also froze, which halted fishing industry, irrigation and shipping transportation. Since the 1,780 miles river restricted the navigation system of Austria, Bulgaria, Croatia, Hungary, Romania and Serbia because of ice formation, shipping would not take over until the cold weather settles.

In Bulgaria, authorities reported a drastic fall of freezing temperature to negative 28.6 degrees Celsius in Vidin’s northwestern town. Navigation from water ports left 224 ships stranded. Business exports remain baffle while sad news gave local authorities unconceivable weather-related deaths in the southeast of Biser village. The death of twenty-eight Bulgarians resulted from the harsh cold temperature, which also includes 8 drowned victims caused by a strong current flow of icy waters from a dam towards the village. Because of the rise of water, it would be difficult for the Balkan Express train to reach Istanbul when it can only station at Sofia.

Moreover, it has been a cold-crash experience for the people in Czech Republic to withstand a negative 40 degrees Celsius in the thermometer scale. According to the news, the death toll heightens to 25 and yet forecasters believed that the numbers would rise up as the day goes by.

Although, government authorities have sought ways to find solutions to keep the death parameter low, the weather still inclines to the worst snowfall in decades. It is nearly impossible to resume land and water transportation because of the forceful freezing winds that continues to put Europeans’ life at stake.