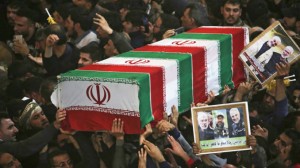 Thousands of Qasem Soleimani supporters flooded the streets of Ahvaz when his body arrives. His body arrived Sunday morning, before dawn in the South-west part of Iran.

Soleimani supporters are seen to be waving flaglets and holding printed pictures of the late Soleimani as a gesture of mourning and support. Many Iranian people look up at Soleimani and are often described as a hero because of everything he has done to the country.

The airstrike attack that killed Soleimani angered the Foreign Prime Minister of Iran, Mohammad Javad Zarif to which he posted on twitter and calling United States attack as a war crime.

Ayatollah Khamenei, Iran’s supreme leader also voiced out his thoughts about the attack, hinting a “severe revenge” to the US. Analysts have also warned for a possible cyber-attack that Iran might commit.

Incumbent President Donald J. Trump gave permission for this attack which the past President finds hard to do because of how risky the action is. The US. President then went to twitter and posted about the US’ military capabilities, saying that it is the best in the world.

The said attack on Iran was an airstrike made possible by drones was reportedly killed 5 more Iranians alongside Qasem Soleimani.

Qasem Soleimani is considered to be Iran’s second most powerful man because of his influence and how he is shaping the country forward. The Iran and US conflict have been going on for years and this specific assassination allows for more escalation of the two nation’s conflict.

The country held a three-day ceremony for Soleimani and on the final stage, the people on Mashhad had the chance to mourn for his death.

Tehran parliament members expressed their thoughts about the death of Qasem Soleimani by chanting “Death to America” which lasted for several minutes.

President Trump spoke about this decision on Friday and said that he authorized the assassination for Soleimani because he is dangerous and also a threat to US personnel and diplomats who are in Iraq.

The President has also decided not to immediately share his action with the Congressional leaders as opposed to what Barrack Obama did on Osama Bin Laden’s assassination. The administration has instead decided to send the information inside the 48 hours that is the time required by the law.

Iraq and other European countries aren’t also notified about this attack which leads to some complications with some nations that are involved with the America-Iran conflict.