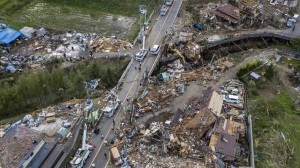 Typhoon Hagibis may have devastated the western part of Japan, leaving costly damages and dozens dead. But, no one can ever stop the land of the rising sun to rise again. In fact, it has already started cleaning-up and deployed hundreds of thousands of rescuers to start the clean-up.

Typhoon Hagibis – which means “speed” in English, has recently caused a serious damage to many parts of Japan as heavy rain triggered landslides and caused rivers to burst their banks. The typhoon also left several people dead, missing and injured. In spite of the damages that it caused, Japan remains determined to rise up again. In fact, the land of the rising sun has already began disaster relief operations. Aside from the police, the fire department, self-defense force, as well as the coast guard have already offered help to support evacuations and searches for missing people affected by the typhoon.

The military and fire department helicopters winched survivors trapped on their balconies and roofs in several locations. Rescue workers also carried out hours-long operations to evacuate hundreds of residents from a retirement home in Kawagoe, Tokyo, which was flooded up to its topmost floor. And according to reports, utility companies are already in works to restore power to hundreds of thousands of residential areas.

According to Tokyo Electric Power Co, nearly 60,000 homes were still without electricity in Tokyo on Monday. Meanwhile, more than 5,000 homes are still without power in Miyagi, Fukushima, Niigata, and Iwate. But Prime Minister Shinzo Abe assured his people that the government “will do everything in its power” to work with agencies to restore services “as soon as possible.” In addition to that, he offered condolences to the families of those who died as typhoon Hagibis devastated some parts of the land of the rising sun.

With these efforts, in spite of the disaster, some people praised how Japan’s efforts in helping its people. United Nations’ Secretary General Antonio Guterres even commended the country’s climate resilience, as well as its “extensive and efficient preparation” for such extreme weather condition.

Positive posts about Japan’s efforts before and after the typhoon are also circulating different social media platforms, commending how prepared they were as typhoon Hagibis wreaked havoc.

Hagibis made landfall on Honshu, Japan around 10:00 GMT on Saturday with wind blasting up to 216 kilometers per hour. A magnitude 5.7 earthquake also shoot Tokyo shortly after the typhoon made its landfall.