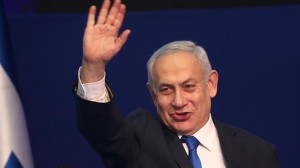 The Prime Minister of Israel, Benjamin Netanyahu has promising exit polls results, putting him ahead of his rival. Netanyahu entered the election seats on Monday and is very close to obtaining a right-wing governing coalition.

The political party of Netanyahu is only one seat short from securing a victory. It is reported that Netanyahu can secure a total of 60 seats. Benny Gantz of the centrist Blue and White alliance is behind in the exit polls as Netanyahu and his Likud Party retain their seats lead.

As of the moment, there are hanging charges filed against Netanyahu because of his alleged corruption and when he took the needed seats and achieved victory, this would help him a lot as he faced trial for his charges.

Shortage on the required seat to win might result in another election, which would the fourth one, in case. Exit polls results, however, are still not final and may change heavily or slightly. The exit polls are made to achieve awareness of what’s happening and know the consensus of the majority.

Several events that are related to elections such as rallies and distributions of posters have seen a decrease which is mainly because of possibilities that the voters are stressed and tired of consecutive elections with stone-cold results.

Adults above 18 years old and even those illegal settlers are encouraged to vote and participate in the upcoming elections. The Election Day in Brazil is also a holiday but might face a decrease in voter turnout due to the COVID-19 outbreak.

Those citizens who are instructed to self-quarantine will also be given the chance to vote through stations that will be provided by the government.

The representative for the Palestinian citizens of Israel is encouraging people to participate in the polls. The Joint List which is a four-party alliance is predicted to claim victory with a record of 14-15. Palestinian citizens who are registered voters of Israel are said to be voting mainly because of US President Donald Trump. His plans for the Middle East, in particular, is their drive to vote.

The Joint List started to endorse someone to go head-to-head with Prime Minister of Israel, Benjamin Netanyahu. Gantz was picked by the Joint list because of his triumph over the majority of the seats. This increases the chances for the Joint list to achieve their intentions.

Gantz said in the latest statement that he is planning to form a coalition but only with a Jewish majority. This approach is crucial for him to win the hearts of the right-wing voters.