New Planet Discovered with Size “Unlike Any Other” 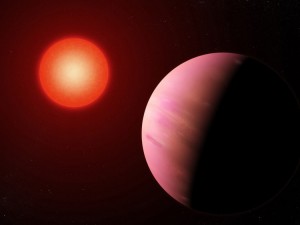 A new planet has been discovered and it’s not like an ordinary one. Apparently, this newbie is three times bigger than Jupiter. And, experts say they haven’t seen anything like this before.

On Tuesday, scientists were surprised to discover a new planet dubbed HR 5183 b. What interests them the most is the planet’s size that is about three times larger than Jupiter’s. Yes, it is apparently bigger than the largest planet in our solar system. But, Jupiter has nothing to worry about as it can still keep its title as the largest planet in our solar system as HR 5183 b isn’t located inside our solar system. Apparently, the newly discovered planet is approximately 100 light years away in the Virgo constellation.

But, what makes this planet so unique and all the more interesting is that astronomers say that HR 5183 b orbits its star differently than the other planets. Seemingly, it is the only known planet to orbit its host star speeding up as it swoops near it and slows as it moves away in extreme distances.

According to Sarah Blunt, a graduate student at the California Institute of Technology in Pasadena and is one of the scientists to discover the said planet, “something must have interacted” with the said planet that caused its unique movements. She added that if there is a possibility that HR 5183 had a neighboring planet and deflected its gravitation. As per Blunt, one of the possible scenarios is that a star could have been deflected the planet or it’s something that they haven’t thought of yet.

As of writing, astronomers are not done yet with HR 5183 b and little is still known about the newly discovered exoplanet. Besides, astronomers are still yet to determine the absolute mass of the said exoplanet using data from the European Space Agency’s Gaia space observatory. As per Blunt, they might also simulate the formation of the HR5183 b so they can get to learn more about the possible conditions that led to such exoplanet. She added that there’s still a lot of work to do in understanding this planet.

While there’s still a lot of things to do, Brendan Bowler, a University of Texas astronomer who hailed the discovery, believes that the unlikely movement of the newly discovered planet is “telling us something” more about the other planetary systems. He also thinks that the discovery of HR5183 b is a “stepping stone” on the path toward understanding planets, from how they are formed and their statistical properties.