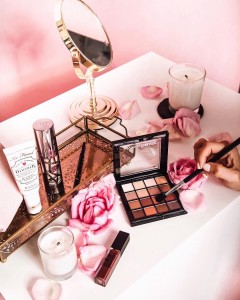 Over the past couple of years, the makeup industry has boomed unprecedentedly. Now, you’ll see brands from famous celebrities and even bloggers online. Don’t be fooled by the wonderful colors and the enticing benefits of makeup. There’s more to this booming industry than meets the eye, and we’re here to tell you some amazing facts about makeup.

The term cosmetics originates from the Greek word “Kosmos” which means “of this world” or “wordly.”

L’Oreal is more than just a brand

L’Oreal is currently considered as the largest cosmetic company in the world today. It launched back in 1909 and its current owner is Lilian Bettencourt, who is the daughter of the company’s founder.

Believe it or not, M.A.C. Cosmetics was established by two men named Frank. First is Frank Toskan, who is a photographer and an experienced makeup artist. The other is Frank Angelo, who is the owner of a beauty salon. The two founded the company with the hopes of bringing in more colors to the industry that will go well with their photography.

Makeup is sacred in ancient Egypt

In Ancient Egypt, makeup was considered as a very important part of religion. That being said, most Egyptians took good care of their bodies and invested a lot of time in putting on makeup so that they can please their Gods.

In England, people from the Elizabethan era believed that lipstick did more than just aesthetics. In fact, many believe that it had magic and had the ability to prevent death. When she fell ill, Queen Elizabeth applied it heavily. When she succumbed to death, she had a whopping half-inch of lipstick on her!

Nail colors were some of the first forms of cosmetics. According to historians, they can be found in as early as Ancient China but during those times, only nobility were allowed to wear them.

The Queen’s own shade

Back in 1952, Queen Elizabeth funded a group of artists to create a lipstick shade that matches her coronation robe. The lipstick called The Balmoral Lipstick was named after her country home.

There’s a lot more to know about makeup and you should continue exploring the in-depth history of this booming industry. What we’ve said above isn’t even the tip of the iceberg. Who knows what other secrets the industry holds?