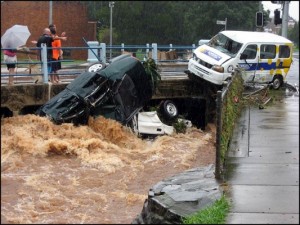 The “Inland Tsunami” – On January 10, 2011, after weeks of rain, the town of Toowoomba which is about 125 kilometres west of Brisbane was hit by a 6 to 8 -meter high wall of water.  It was described as an “inland tsunami” and occurred without any warning.  Due to the amount of rain, the rivers and creeks around the town overflowed quickly creating torrents that overturned cars, snapped trees, swamped homes, destroyed buildings and even people swept away in floodwaters. The deluge came from nowhere created landslides and raging torrents causing cars to be tossed and piled up on each other. It was a desperate and horrifying situation resulting to 10 deaths and 78 missing people. 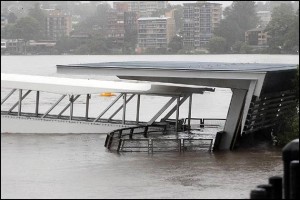 The “River City” – On January 12, 2010, the city of Brisbane which is known as the “River City” experienced the worst flooding in history. The Brisbane River that surrounds the city overflowed and brought destruction to homes, businesses, properties and lives.  More the 20,000 homes and businesses were devastated.  Around 100,000 homes were without power and people moved to the evacuation centres.  It was sleepless nights for the residents of Brisbane but their hopes remain strong amidst the ongoing flood crisis. Their life has been disrupted and they have to deal with food shortages and inadequate facilities.  It may take months to complete the enormous tasks of rebuilding and returning to normal life.