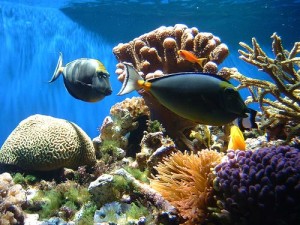 The World Resources Institute revealed in one of its reports that 75% of coral reefs  are in the stage of “extreme damage” due to human practices and the fast changing climate in our planet.  The last 10 years showed that the worsening condition of our marine ridges had grown by 10%.  The most threatened reefs are in Southeast Asia.

What is a coral reef? It is a group of marine plants, animals and corals on the ocean or sea ground.  It grows upward and has deposits of organisms such as mollusks, algae and protozoans. It also contains non-living mineral structures and comes in 3 types:  atolls, platform and barrier reefs.  The Great Barrier Reef is the world’s largest reef that measures 1,240 miles and stretches along the coastline of north eastern Australia.

What are its benefits?

What are the threats to the coral reef?

How to preserve the coral reef?

Several actions are being done to preserve coral reefs from further threats. Conservationists have started growing and transplanting coral seedlings to restore existing colonies. Business groups and policy-makers are also initiating programs and policies with strong focus on how to preserve and conserve the Earth’s ecosystem.  Other possible actions that each person can do are: reducing carbon emissions; don’t pollute water systems; volunteering in the clean-up of coral reefs and supporting projects concerning the preservation of the environment as a whole.