Storms of the Desert 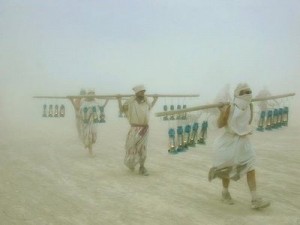 Dust storms or sandstorms – they usually happen in desert areas. They are strong winds that carry large amount of dust, dirt or sand which can result to the loss of visibility of about half a mile.

When and where do they occur
Dust storms occur in many parts of the world especially during drought season.  They happen mostly when heat simmers and before the thunderstorm occurs. They look  like solid walls of debris and dust traveling horizontally for  many thousands feet high and can travel several miles an hour.
The noticeable dust storm took place in the year 1930 in the United States and Canada where thousands of agricultural workers were displaced by it. By the year 2007, the dust storm also happened in Texas, devastating the area, sending people to the hospitals because of respiratory problems and delaying many flights at Dallas Forth Worth Airport.

In other parts of the world particularly in Australia (although this is less to happen in the area compared to thunderstorm), they were hit by this strong and great dust-up which begin from South Australia following its way  northwards to Victoria and some portion of New South Wales and unfortunately reached Sydney in the year 1902 during the period of drought. This strong dust storm which hit the area, together with this uncommon phenomenon called the balls of fire, showered sparks in the sky and set some buildings on fire.

Just recently, a strong and forceful dust storm struck Mandalay and made large-scale damage on billboards erected in  streets flyovers. All of them were uprooted. Trees near Mya Taung monastery were also uprooted while power supply in the area had been cut by the fierce dust storm. The power supply was restored only after a day of the occurrence.

Warning signs of dust storm
As it can be seen as a solid wall of brown dust in the distance, they usually precede with a thunderstorm. If you can see that there is a thunder head in the clouds, it is expected for a dust storm to occur in the area.

Protection and safety tips
A dust storm will affect motorists on the road since it can lessen their visibility to see what‘s coming. If you are on the road driving and observed that there is a coming dust storm, turn on the car radio and listen to the news and warnings. If the visibility reduces below 300 feet, stop and turn off your vehicle’s lights until the storm  subsides. Stay indoors as much as possible because dust which is accompanied by the strong winds can carry debris which can cause damage not just to your properties but also to your health if you  inhale or blow into your eyes.

Life in the desert