Taal Volcano Spews Ash In Philippines, Volcanoes In Other Parts Of The World Erupt As Well 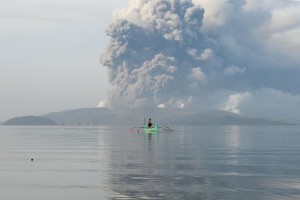 It has been a rough couple of days for the people of the Philippines. More specifically, it has been very rough for those living near the Taal Volcano. Last January 12, the volcano which has been showing signs of erupting over the past couple of years spewed lava and ash forcing those within the nearby areas such as Batangas and Tagaytay to evacuate immediately.

The volcano has been under the close watch of PhilVolcs over the years but the sudden eruption over the weekend caught even the experts by surprise. All through the last couple of days, the surrounding area has been disrupted by earthquakes but what the local authorities and people are most concerned about are the copious amounts of ash coming from the volcano.

The ashfall is wreaking havoc all throughout the region but the residue is reaching as far the cities in Metro Manila. The people in Batangas have left their homes to get to safety and they can only hope that the ashfall doesn’t destroy what they have left behind. Currently, houses in the Batangas and Tagaytay area are collapsing under the weight of the ashes on the roof.

Aside from damaging properties, the ashfall is considered highly dangerous to humans as well. People are advised to wear N95 masks to filter out any solid residue in the air while they are breathing. Even animals are not safe from the after-effects of the ashfall. In fact, many residents are lamenting the fact that they aren’t able to take their pets and livestock with them. However, there are many efforts from local LGUs and people to save the animals.

For now, experts have yet to determine when the volcano will stop with its activities but the estimates range from a couple of days to as long as several months. Hundreds of families have been displaced already but donations from the government and from other people across the land continue to pour. Of course, global support is there as well.

Not surprisingly, there are other active volcanoes around the world. Aside from Taal in the Philippines, other volcanoes such as Mt. Shintake in Japan and Popocatepetl in Mexico have erupted as well. This led many to believe that the “Pacific Ring of Fire” is now active.

However, experts claim that such occurrences are normal. There are many active volcanoes that erupt per year. What’s different though is that there are many new monitoring technologies that allow us to check eruptions easier which makes it seem like there are more than usual now.