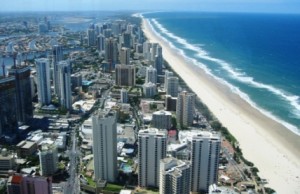 The city of Gold Coast in Queensland Australia is bustling with almost 10 million tourists every year and brimming with popular tourist attractions, summer adventures and nightlife extravaganzas.

A Place for Sporty People

The city takes pride of the fact that it is the fast-growing sports and events capital in Australia. National teams representing the city include Gold Coast Blaze (basketball), Gold Coast Blue Tongues (ice hockey), Gold Coast Titans (Rugby League), and Gold Coast United FC (football). Sports facilities were also built to accommodate sporting events such as the Gold Coast Convention and Exhibition Centre. The city is now on the list as one of the candidates for the 2018 Commonwealth Games.

Visitors from all over the world are also drawn by the city’s magnificent beaches stretching all the way along the coastline. Among the 35 beaches along the city’s coast, Mermaid Beach, Surfers Paradise, and Main Beach rank as the most-visited tourist spots in Australia. Spectacular theme parks are just within the city particularly the Australian Outback Spectacular, Warner Bros. Movie World, and Dreamworld. Visitors who want to have a panoramic view of the city’s exquisite landscape and intricate waterways can see them through the Q1 Observation Deck at 750 feet above sea level.

Perfect Place to Relax and Unwind

Tourists and locals alike love the city’s sunny, subtropical climate and a pleasant 66 to 83 degrees Fahrenheit average temperature. With only 137 rainy days compared to 287 sunny days a year, Gold Coast has become a favorite as a summer destination all year round. The city along the coast is the perfect spot for summer getaways due to its location along the temperate zone facing the Pacific Ocean. An aerial view of the city’s landscape reveals its intricate man-made waterways resembling a gigantic piece of ancient artwork.

Before the city was established in the year 1875, Gold Coast was called “Kuranggul” by the native which means “endless lumber” due to its abundant supply of cedar trees. European explorers settled in and built their base on a suburb of Gold Coast, Nernag. Tourism began to flourish in 1925, the time when shopping centers and hotels such as the Surfer’s Paradise Hotel were built. As to how the city got its name is still a subject of discussion. Others believe the name was coined from real estate speculators and journalists who referred to the place as “Gold Coast” or the City of Golden Opportunities.