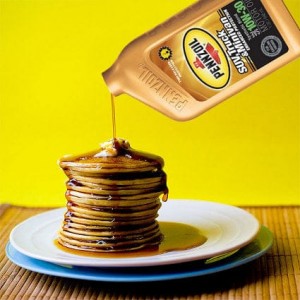 Don’t believe in everything you see on TV. This is because even the food ads can mislead you. Don’t be fooled again next time and check out these tricks that advertisers use to make food in every ad looks more delicious.

Have you ever wondered how fruits in every TV ad look so fresh? It’s because advertisers use a deodorant spray on them to make it look shiny and oh so fresh. Sometimes, they also put hairspray on it. If it can make your hair shiny, it will also make fruits look like that too.

Did that pancake commercial made you crave? Thanks to the engine oil they used. Don’t feel so bad; they have an excuse, though. It’s because pancakes absorb real maple syrup too quickly to photograph or film. Hence, they replace it with engine oil instead.

Like pancakes with real maple syrup, seafood is also hard to present on camera. To keep them always looking fresh and juicy during the entire shoot, food stylists use a mixture of glycerol and water to treat it.

Noodles also dry quickly and become soggy fast which makes it hard for advertisers to photograph them or film them for a TV ad. To solve this, they coat it with glucose syrup. They also use this trick for desserts.

Speaking of desserts, one of the favorite desserts for ads are cakes. But don’t fall for this too as they are surely not made entirely with cake. It also has some cardboard in it too. Advertisers interlay cakes with cardboard and fasten them with toothpicks to make them look bigger, fluffier, and drier so they’re easy to photograph or film.

The foam on the beer, milk, and/or coffee in commercials sure makes it look so tasty. But it’s not all natural. Apparently, advertisers add liquid soap on them. This creates a more stable foam that is much easier to film.

One of the hardest food to film is ice cream. This is because the hot studio lights make them melt faster which makes it harder to photograph or film. So they use mashed potato instead. Advertisers also use a paste of starch, corn syrup, icing sugar, fat, and other ingredients to mimic the consistency of mashed potatoes so it can be shaped easily.