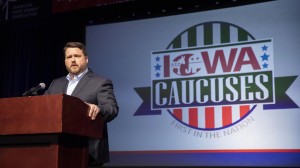 Chairman Troy Price of Iowa’s Democratic Party is planning to resign from his position after the results of the caucuses were released. The incident has put the state in a very tight spot that might end up losing their chance to become the host of the presidential nomination process.

Troy Price admitted that what happened on the night of the caucus is unbearable and he has admitted that it was his failure. “As chair of this party, I am deeply sorry for what happened and bear the responsibility for any failures on behalf of the Iowa Democratic Party.” Mr. Price wrote.

The chairman also said that it is better and much faster to move on forward without his supervision. Mr. Price said that when his replacement has been elected, he will resign.

Mr. Price started his chairman career back in 2017 and has been consistently supervising the caucuses.

The delays and errors of the results pushed the chairman to his resignation. This delay happened in 1,700 precincts and its intensity further increased the pressure on the chairman of Iowa’s Democratic Party.

Tom Perez, The National Chairman of the Democratic Committee expressed his disappointment in this particular matter. He swiftly insisted on a recanvassing of the precinct results.

The delays have also raised question two involved parties which have been acknowledged by Mr. Perez.

The causes system denied Bernie Sanders victory with the most votes because it is calculated and awarded depending on the support across the state.

Pete Buttigieg won the caucuses by basing on the metric which is believed by the state and the officials to be highly prioritized.

Amidst the controversy, the state party confirmed that a recanvassing of the results are on the way as requested by the two parties. The recounting procedure will take place immediately and will be completed within two days of processing.

Mr. Price, however, added that all the blame shouldn’t be pointed towards the state party as they have a lot of partners when the failure happened. “We worked collaboratively with our partners, our vendors, and the DNC in this process, and I am confident the review will be able to determine exactly what went wrong, what went right, and how we can avoid this from ever happening again,”

The Chairman Troy Price boasted a lot of credentials before becoming the head of the state party. He was once an executive director of one right advocacy organization named One Iowa. He also has a lot of political involvement with past politicians.