Trump Arrives with Surrogates in New Hampshire to Criticize Democrats 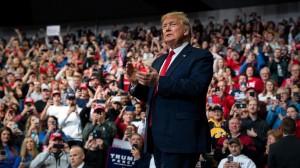 Trump supporters blasted the rally with chants about Speaker Nancy Pelosi, one of those who pushed Trump’s impeachment. Pelosi’s behavior on Trump’s speech on State of the Union address was also highly criticized by Trump and his supporters. The President says that the Speaker is angry against him, where in fact, he should be the one angry.

“I’m speaking and a woman is mumbling terribly behind me, angry, we’re the ones who should be angry,” he said.

Despite everything that Nancy Pelosi has done, the President still had the time to thank her and all others involved for his impeachment trial. According to Trump, the case and all the buzz increased his position on the poll.

Trump’s campaign team clarifies that the detour on New Hampshire is intended to gain the attention of a big number of Democrats.

Amidst the allegations that the President is throwing, he also made some speculations, without enough evidence that Democrats are doing illegal moves by transporting voters from Massachusetts to New Hampshire on the recent elections, last 2016.

Trump easily switched his narrative towards working-classes that they might experience scarcity and decrease in terms of manufacturing jobs.

Recalling his remarks from his 2016 speeches, President Trump emphasizes his fears of immigrants “murders, rapists, and some other things. They’re going to be poisoning our children with drugs right here in New Hampshire.”

The President’s speech resembles the same approach he did back then, an important one and worth noting would be his usage of the poem “The Snake”. In this literary piece, a woman took care of a snake and made it into her pet. It then turned its back against her and bit her. Donald Trump aims to compare the snake in the poem to illegal and undocumented immigrants.

In his private call with the Mexican president last 2017, he called New Hampshire as a place for drugs, a drug den to be exact. This remark, however, seems to have been forgotten and forgiven by the people of New Hampshire.

Compared to his old campaign-style, nothing seems to have changed. The president departed quickly as soon as the rally ended in Delaware.