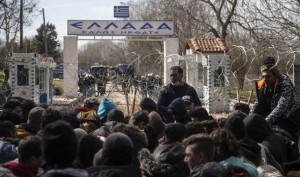 Covid-19 is a huge problem globally and experts believe that we’re still far from the climax of the pandemic. While the virus itself is a big issue, it seems like the rest of the world’s attention is starting to veer away from other pressing matters. While Covid-19 is something worth keeping tabs on, nations should still attend to their current issues.

Last February 28, Turkey eased its border control, thus allowing immigrants to get into the country at a faster pace. Turkey had agreed to prevent immigrants from entering the EU in exchange for aid but now, it has lessened that grip on immigrants, most likely due to the coronavirus scares. More specifically, Turkey has become more lenient in immigrants passing over the Greek border.

In response, Greece closed its borders and it also announced that it will begin suspending asylum applications for a month. Although the EU is facing another immigration crisis because of Turkey’s recent actions, it still urged Greece to reconsider its actions. This is most likely because the EU understands the plight of the immigrants and are concerned for their safety.

Aside from becoming more strict with their borders, reports suggest that Greece has become more aggressive when it comes to protecting theirs as well. According to eyewitnesses, teargas and water cannons are being used to forcibly push back the people who are trying to cross the border. The actions sparked outrage online.

To help lessen the problem, the EU has announced that it will pay select migrants on overpopulated Greek islands so that they will voluntarily return to their home countries. However, it seems unlikely that this will make a large impact on the current crises as the EU can only do so much to lessen the population on the said Greek islands.

This and the coronavirus issue is putting EU nations at a standstill and it seems like the problems are only about to get worse. Understandably, the EU is concerned with both the wellbeing of its citizens as well as the immigrants. The last thing the EU wants now are overpopulated cities now that there’s a highly-contagious outbreak on the loose.

To those not in the fold, immigrants from middle-east countries are immigrating to the EU and in other countries because of a war that has taken countless lives in Turkey, Syria, and other places. Hopefully, the pressing matters reach a resolution soon before it gets worse.