Violence Sparks in India Because of Citizenship Law 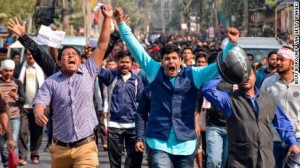 Rioters have gathered in the northeastern part of Delhi where 17 people died and around 150 are left injured. The riot started because of rioters asking citizens if they are Muslims or Hindus. Among those who are injured have suffered wounds from gun shrapnels and wounds from stones and other blunt objects. The communal violence is the first to be seen in decades that this intense and large-scale.

It was President Trump’s second day of visit to India when the protests broke out.

The riot and the overall incident was associated with the protests that have been happening for months that are meant to criticize the citizenship law. Advocates and rivals of the party have also been in frequent battles which may have sparked the riot.

Prime Minister Narendra Modi won the reelection last year for India’s government which allowed him to implement more of his agendas and plans. One of which is his objective to force Hindu as the primary religion in India.

This approach is called the citizenship law which makes it easier for people with different religion to have citizenship. Having this plan, the Muslim people aren’t happy because even though India’s population is mostly composed of Hindu, 14 percent of the total population are still Muslims.

Among the riots and violence, some lean towards peaceful protests. Almost hundreds of thousands joined the protests, among them are elderlies and mothers who are known to be the first groups to have initiated the protests.

It was the first time the world saw something so violent over these past decades and the last one being in 1992. This year’s riot on the northeastern Delhi broke out because of clashes made possible by a Modi’s Bharatiya Janata Party’s local leader named Kapil Mishra. The local leader issued threats against several groups of Muslim and according to him, he will be taking actions if things don’t die out by themselves.

Police aren’t in control of the riot and some of them even encouraging protestors to assault Muslim groups, according to a shop owner. Also, he said that peace and no tracks of violence are present in the area for two months when the protestors started, but it all changed when the supporters of the law came.

A lot of injured people, over a dozen, were sent to Guru Teg Bahadur Hospital through ambulances. Most of the injuries that they received are from gunshots to which some of the policemen are responsible.  A shop caretaker named Mohammad Sajid witnessed a lot of gun violence and said that they shouldn’t have open-fired.