Why Do We See Rainbows? 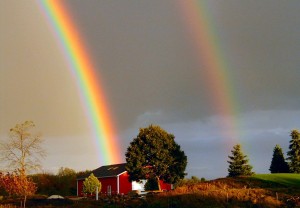 A rainbow is a colorful arc shaped band of light in the sky caused by the refraction and reflection of the rays of the sun which usually appears visible during or after precipitation in the form of rain, etc. It happens when the sun’s rays illuminate the droplets of moisture in air. After a rainy day during summer, a beautiful and colorful rainbow would usually appear.

The appearance of rainbow has been observed by people for thousands of years. It has been the object of discussion by prominent scientists, one of them was Rene Descartes during the year 1637. As a matter of fact, it was mentioned by Descartes in Carl Boyer’s book the “The Rainbow from Myth to Mathematics”.

According to him, a rainbow would appear not just in the sky. It would also appear in close proximity, although significantly smaller in size than those seen stretching across the horizon. He pointed out from his observation that it was a result of light illuminating the droplets of water as what can be seen from certain fountains. He further stated that since droplets of water are round, the appearance of the bow does not change in any way.

From this, he explained how the shape and color of the rainbow appear.  30 years later, it was Isaac Newton who discovered the seven colors of the rainbow. The universally accepted seven colors are from red, orange, yellow, green, blue, indigo and violet or the so called Roy G. Biv.

He said that the sequence of the colors of the rainbow is due to refraction. According to his study, each color has its different wavelength. Red has the longest wavelength which is slightly bent and the violet though having shortest wavelength, bends most.

To see a rainbow, you have to stand with your back to the sun because, otherwise you would not see its magnificent colors.  It is best seen in the early morning. It is such a wonderful sight, especially when watching it with your sunglasses on. Although we only see what is below in the horizon, we could still see the upper part of it. However, if you are riding on a plane, you can see the complete circle of the rainbow when looking at it while the shadow of the airplane is just in the center of the rainbow.

One thought on “Why Do We See Rainbows?”