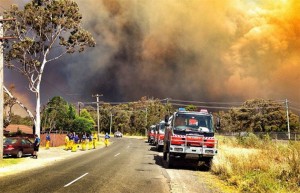 The state of New South Wales has been experiencing the most serious bushfire crisis in more than 10 years.

The destruction of the super blazes may reach over $30 million as more “challenging weather” is predicted in the coming days.

The most devastated areas are the regions of Springwood and Winmalee located in the Blue Mountains, which is around 50 kilometers west of Sydney.  Emergency warnings have already been issued as the bushfires continue to intensify.

Around 200 houses have been destroyed and more than a hundred damaged. Evacuation centers have been established where relief operation, medical treatment and counselling are provided to the bushfire victims.

Other places hit by the bushfires are the eastern New South Wales and the central and north coast.

The government and charitable institutions have been quick to respond to the needs of the affected communities.

Aside from homes, roads and infrastructure have also been damaged and the estimated cost of repairing them is still unknown.

The fire started in October 16 and firefighters are still battling almost 100 fires across New South Wales.

“Today’s conditions, both the hot, dry conditions but also the wind conditions, have contributed to the difficulties faced by firefighters and communities on the ground. This difficult, damaging and dangerous day and these conditions are not going to be over quickly.  Weather conditions are changing. It will take some days to see the end of these fires, and I suspect if we get through that without the loss of life, we should thank God for miracles.”

The five deadliest bushfires in the history of Australia happened due to record-high temperatures, low humidity, widespread drought and strong winds. They all happened between the summer months of January and February in the states of Victoria (VIC), South Australia (SA) and Tasmania (TAS).

Heat wave and bushfire in Australia