Highlights – News of the Week 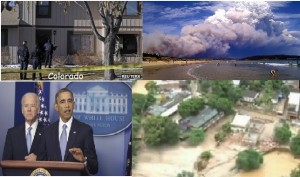 Tasmania Bushfire – January 5, 2013:  Heat wave has caused a bushfire in the Australian state of Tasmania leaving thousands of people including tourists stranded in the island. There were 100 properties destroyed including a school and a police station. The temperature in Hobart, the capital city, reached 41 degrees centigrade.  According to one of the residents in the affected community, “the whole place just being engulfed in flames, just like a movie.”  The burning trees were like firecrackers and the fire reached up to 30 feet high. The cost of damage is still not available.

Colorado Shooting – January 5, 2013: Another shooting happened  in Aurora Colorado leaving four people dead including the gunman. The motive for the killings is still not known.  Last July, 12 people were killed in the mass shooting at a cinema here in Colorado.

Rio de Janeiro Flood – January 4, 2013:   More than 3,000 people were evacuated due to the flooding in the capital city of Brazil. Within 24 hours, almost 22 centimeters of heavy rain fell in the mountainous part of northern Rio de Janeiro. A nearby dam failed and released floodwater to the community of Xerem. According to reports, one person died and eight are still missing.

US ‘Fiscal Cliff’ – January 2, 2013:  The US Congress passed the American Taxpayer Relief Act of 2012 and became a law after it was signed by US President Barack Obama. Under this law, the wealthy will pay more taxes and the spending cuts delayed for two months. According to the President Obama, “the deficit is still too high.”   The approval of the US ‘fiscal cliff’ deal is “just one step in the broader effort to strengthen the economy”.

New Year’s Eve Celebration – January 1, 2013: The spectacular fireworks display on New Year’s Eve lit up the skylines in major cities around the world. If some countries followed the traditional celebration, the others indulged in modern activities. What is interesting to note is the length of preparation and the cost involved for each event. One good example is the  Sydney fireworks display which took more than a year of planning and preparation  and the cost amounted to US$6.9 million.

Highlights of the Week 6th Jan