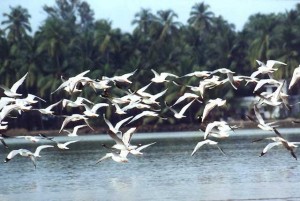 Birds are fascinating creatures that can do a lot of amazing feats. Even in ancient times, they have inspired earthbound people to reach for the open sky.

Science has revealed the secret as to how birds defy gravity and has later become the principle behind aerodynamics used in aviation technology.

Birds have a way of knowing the right time and place of migration. They instinctively know if they have to move to a different location. The need for food or nesting ground is one of the known causes for migration, particularly if there’s a change in season or other man-made factors.

What really baffled scientist even today is how they get to their exact destination at a very precise and consistent manner. Migratory birds seem to have a built-in navigational system that allows them to stay aligned to their course hundreds of miles away.

Migratory birds exist in many parts of the world and their flight paths can span across continents and oceans. Their distance traveled also depends on the species of birds. Some are only capable of traveling short distances while others can make intercontinental flights.

Some of these migratory birds include:

One of the most peculiar flight patterns of migratory birds is the famous V-formation. Flying at long distances which can take hundreds of miles requires efficiency of motion, energy, and endurance.

V-formation enables the birds in flight (except the first one) to ride the vortices created by the wingtips of the leading birds and allows them stay afloat with the least amount of effort.

Not Bird-brained at All

Surprisingly enough, birds are actually smart. They are not as “bird-brained” as most people think. As a matter of fact, they can be trained to do simple tasks just like any other household pet.

Homing pigeons are one of the species of birds that are known for their intelligence. People in ancient times know this. King Cyrus of Persia in the 6th century BC used homing pigeons to send his message all over his empire.

Parrots belong to the family of intelligent birds with remarkable memory and learning skills. They can replicate any sound from human voices to vehicles, tools, and many other things. Because of this ability, they are prized as pets. Masnavi, a written account by Rum of Persia in 1250 AD bears the first record of training parrots to speak.

Birds of prey are feared by smaller vertebrates and other birds for their keen sense of sight, strong, sharp beaks and talons, and powerful wings. Their exceptionally sharp vision allows them to zero in their target from over a mile away and swoop down at their unsuspecting prey with blinding speed. Birds of prey noted for their remarkable hunting skills are eagles, ospreys, kites, hawks, buzzards, harriers, vultures, falcons, and owls.

Some birds are also known for their peculiar way of behaving with other birds of the opposite sex. Love birds are one example of birds with a special kind of bond, spending most of their time perching in pairs as lovers often do. Their unusually strong affection with the other pair has earned them their name “love birds” although they can also be bred without a pair. However, due to their strong sense of companionship, a single love bird may require more attention from their owners than paired ones.

When the Geese Strike