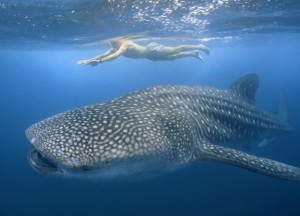 A man swims with a feeding whale shark in Indian Ocean off Mozambique. Photo: (dsc.discovery.com)

Life in the depths brings forth dangers on every living creature due to the environment teeming with predators—sharks. They were feared by humankind for centuries because of their gigantic, razor-sharp jaws that can tear their prey into shreds in just a single bite. In Fiji and Solomon Islands, sharks are not allowed to be eaten and harmed by humans because they believed that these creatures possess the spirits of their dead ancestors.

After several years of its history, researchers have found a lot of information about these massive, fearful but fascinating creatures of the depths. The study shows that not all predators in the ocean are harmful to humans.

a) Sneak attack is the most fatal attacks of sharks which happen when the prey does not see the shark because of the repeated deep bites they received.

b) Bump and bite attack is when the shark does not notice the prey which he bumps before he bites then swim away from the prey.

c ) Hit and run attack when the victims do not see the shark which bites and leaves without any life threatening injuries.

Since sharks are mobile, you cannot detect a certain place where they will bite. Others will stay in the depths or in shallow and crowded places such as beaches while others stay in the lowest point.

Sharks attack even in the shallow or deep waters during dusk, night and dawn. This are the times that sharks usually feed. So, to be safe from the sharks attacks take some few safety measures: