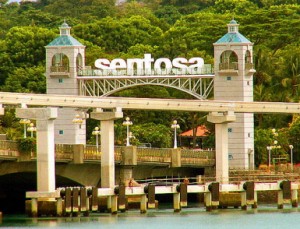 See the beauty of nature and the comforts of modern living in the bustling cities of Singapore. To get a glimse of the beautiful sceneries of Singapore, tourists and visitors can scale the Tiger Sky Tower where they can have a marvelous view of the beautiful Sentosa Island. With an excellent vantage point of 131 metres above sea level coupled with a clear bright sky, visitors can see some parts of Indonesia and Malaysia. The Butterfly Park is a perfect place for budding scientists to explore and to discover diverse species of butterflies and other similarly interesting species of the insect kingdom. It houses more than 3,000 exotic species of insects you’ve rarely seen, or may have never seen in your life.

Perhaps the most stunning and mesmerizing view of marine life which tourists can see only in Sentosa, Singapore is the Underwater World. It was first opened to the public during 1991. Since then it has attracted large number of visitors all over the world. This oceanarium is home of more than 2,500 species of marine animals and 250 species for fresh-water animals from different places in the planet. Visitors will be captivated to the fascinating view of sharks, turtles, moray eels, sting rays, other fishes and coral reefs from glass-windowed tunnel of the underground oceanarium. Visitors can also get the feel of the underwater world with their ‘Dive-with-the-Sharks’ and ‘Dive-with-the-Sharks’ program.

Sentosa also boasts high-tech and sophisticated cinemas that give audience a next-to-real experience today’s 3D movies. The secret behind this extremely realistic effect is the revolutionary DTS 6.1 sound system, motion-based chair and other environmental effects. Their Cineblast also features high-tech digital technologies, lighting, sound, and motion systems that provides the thrill of going through every places of the virtual world. Going back through history, the Fort Siloso, stands mightily as stronghold during the World War II. First built by the British during 19th century, it was modernized to include 2 Mark2 guns and 2 12-pounder guns in its arsenal. People can tour around the fort’s barracks, gun emplacements, tunnels and the artillery guns way back during the late 17th century.