Terrors in the Skies 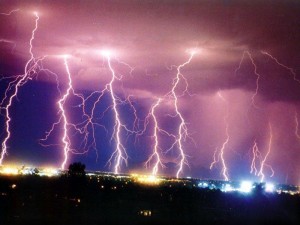 The sight of an intense flash of light stretching from cloud to cloud or to the ground makes some people cover their ears in fright or run for cover. The sound of loud explosion reverberating across the sky can be frightening. Some thunders can be so loud that even the ground trembles at its mighty roar. But despite the enormous sound of thunder, it’s nothing more than just air rapidly expanding as lightning weaves its way through the skies.

So where does lightning come from? During a thunderstorm, the rapid movement of air in a thundercloud causes some particles to be electrically charged. Eventually, the particles on top of the thunderstorm displace some of its electrons causing the cloud to be positively charged. On the other hand, the particles on the bottom become negatively charged, creating tension between the upper and lower part of the thundercloud. Lightning is seen as a result of releasing the tension, neutralizing and creating a balance in the electrical distribution in the atmosphere.

The intense heat (5 times as hot as the sun’s surface) generated by a massive electrical discharge causes the air to expand in just a fraction of a second. Consequently, the compressed air around it is now 100 times higher than the normal air pressure, creating a shock wave that can be heard for thousand yards in every direction. It’s the rapid explosion of air that generates the sound of thunder. No wonder thunders and air raids sound alike.