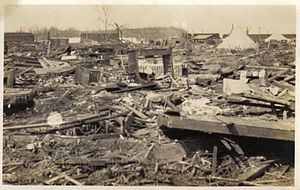 Ruins of the town of Griffin, Indiana (Photo: Wikipedia)

March 18, 1925 – the most horrible and deadliest tornado in America’s history was set in motion from southeastern Missouri to southern Illinois down to Indiana and lasted for about 3.5 hours.
The tornado traveled at its typical velocity of about 62 miles per hour (mph) or doubled the velocity of a regular tornado. It had a wind speed from the funnel of 261 mph which increased up to 318 mph. This tornado caused a lot of destruction on earth with  15, 000 houses uprooted and swept away, vehicles flown into the air, and barks from the trees shredded.
The devastating phenomena killed 695 people in certain areas and about 2000 others were seriously injured. It’s been known as the strongest and the longest tornado recorded in the history.  The estimated cost of damage to properties alone was more than $16.5 million dollars or nearly $2 billion dollars compared to these days dollar value.

According to the report, the cost of destruction attributed to this worst  tornado particularly in Missouri towns alone was about $500,000 . In the state of Illinois, the tornado brushed off completely the entire town of Gorham causing deaths and injuries to the entire population.  Indiana  also experienced complete devastation when the tornado mowed the land.  Deaths, injuries and damages to livelihoods and properties resulted from this horrible Tri-State tornado.