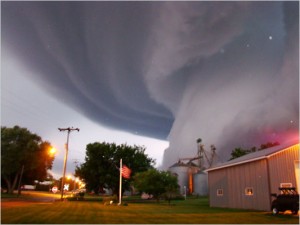 Nearly every place around the world experiences the ferocity of the most awesome and feared windstorm – the tornado. It can inflict serious damage to life and property depending on its size, velocity, intensity, and the place where these winds occur. Strong enough, it can send cars flying, root up trees, and houses, and wreck destruction along its path. Nothing can stand in its way.

The constant threat of tornadoes in areas where they occur frequently prompted ways on how to detect them early on.  Since nothing can be done to stop a fully developed tornado from ravaging its way, certain measures were designed to counter its effects such as building underground basements where it can be relatively safer during tornado attacks.

Early detection is not possible before the mid-20th century. Most tornadoes are formed just a few minutes after clouds shows visible signs of tornado attacks.  Hence, it would be too late for evacuation. Before, they have to rely on local news weather offices for information. But with the use of modern weather forecasting devices, local weather stations can receive information way ahead of time, thus giving more time to prepare for the oncoming disaster. Weather patterns are kept and studied to determine the likelihood of a possible recurrence of tornadoes. Furthermore, areas that are prone to tornadoes are also charted out.

Detecting the development of tornadoes and tracking down their paths are made possible through the use of a complex network of weather radars. They use the Doppler weather radar to monitor changes in wind direction and velocity. Image from the data will show you how big a tornado is as well as the other places where the same occurrences can be observed. However, not all factors are necessary for tornado formation. Sometimes they would just come contrary to what is expected of them.

This is where storm spotters steps in. These spotters can be any person with a knowledge about the telltale signs of storms and a keen observer. They can be deployed to report on any weather condition that could pose a threat to lives and property. The local weather office would in turn, broadcast the weather hazard relayed by the storm spotters so that people can respond accordingly.