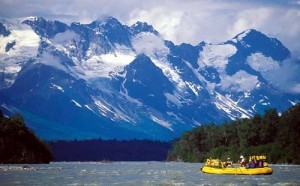 The term Alaska comes from the “Aleut word” means “the great land” which is originally used to describe the Alaska Peninsula. It is called as the last frontier because of many opportunities found in the area such as forest, marines, minerals, oils and other natural resources.

Alaska occupies the whole northwestern county of North American Continent with Canada to the east, Arctic Ocean to the north and Pacific Ocean to the west separating Alaska from Asia via Bering Strait. Since 1912 Alaska has become part of the territory of US and officially the 49th state of United State of America on January 3, 1959 after it was bought for $7.2 million ($113 million today) from the government of Russia through the Secretary of the State William H. Seward. With an area of approximately 1,518,800 km2 or 586,412 m2 Alaska becomes the US’s largest state followed by Texas, California and Montana.

As one of the states of the Union, Alaska extensively developed its fishery, forest, minerals, natural gas and oil resources. They welcome the huge number of immigrants that helped the workforce to enhance their capability to become part of the statehood or Union.

Climate: Magnificent mountains, moving glaciers, hot springs, ice covered streams, forests and deserted tree-less islands, Alaska can be describes as the land of contrasts. It experiences extraordinary precipitations, snowfalls, extreme winds and sun’s heat. Western Alaska experiences transitional climate which is lower in temperature with less precipitation. Most of the time, however, it experiences extraordinary winds and snowfalls. Central Alaska has the continental climate with high temperature deviations but only experience fair precipitations and snowfalls.

Anchorage is considered as the chief commercial midpoint of the southern Alaska while catering the entire state by means of transportations. Juneau, the capital city of the state is the center of commercial ports and rank as one of the leading fishing ports all over the world. Aside from fisheries Alaska is also a center of tourism, education and government.

Industries: Aside from fishing, some communities in Alaska have established other trading such as mining, logging, livestock, agriculture and fur-trading since 18th century under Russian government up to present. Visitors and tourists come to see the spectacular towering peaks, inlets, hot springs, endless frozen streams, rivers and experience the contrasting atmosphere of the area such as the steaming active volcanoes and the frozen cold fields.

The best month to visit Alaska is during summer and autumn where they have their festivals in Sitka’s Alaska Day in commemoration of the day where America bought Alaska from the Russian government, wilderness Women’s Contest in Talkeetna and many others.  They also celebrates fur auctions, sled-dog races, fireworks and outdoor games some also enjoys the annual competitions such as ice carving, dog mushing competition, Iditarod races, swimming among many others.

Life in the Arctic