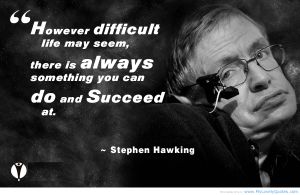 No one can beat the odds of a famous scientist of the twenty-first century. From Albert Einstein to Thomas Edison, we discover how the world can interact with humans in many ways.

As science revolutionized an in-depth story of a matter, Stephen Hawking, a physicist and cosmologist redefines new theories of gravitational relativity, radiation and theoretical cosmology. Check out these fascinating facts about our ingenious scientist who made numerous endeavors to science.

> It is little that we know about Stephen Hawking. He is obsessed with planets, stars or any galactic matters of the universe during his childhood years. Though he wished to pursue his career into the laws of energy – that is Physics with his dream to reach the space, his grades were not reliable to impress school teachers. In fact, he was known for getting mediocre grades before the world revealed that a science wiz was about to unveil science in a new perspective.

> Hawking’s stepping stone to enter university falls into a financial constrain due to his father’s lack of monetary support. Although his father saw his potential to earn scholarship rewards after his ordeal grades in his previous high school years, he was granted by Oxford University in UK to pursue his real scientific dream.

> As a genius college student in the institution, no one could expect about his participation to the rowing team. His motivation grew as his fellow team made his role as a steer man. Despite his active sportsmanship in representing Oxford’s popular sport, he needed to compensate his time with grades and continue his journey to scrutinize more lab studies.

> Towards the achievement of Astronomy and Physics, Hawking proved his concept regarding radiation from a black hole in space. Through his teachings in Cambridge University, he explained to future physicists the basic model of a particle and combined mathematical formulations of Physics. To enlighten Albert Einstein’s theory, he preside linkages to general relativity and cosmology. Thus, speculating Quantum theory and Gravitational Relativity to analysis.

> Aside from the new concepts developed, Hawking’s proposed the space time of the universe that there are no boundaries after all. The orderliness of energy as said in his concept is constant and therefore, does not reverse the process. He also claimed that the universe is created in a four-dimensional scope.

> Because Hawking fantasizes space travel, sometime in 2007, his daughter, Lucy Hawking joined him produced a Children’s Book about a young traveler who explores the midst of life origins in outer space. One of the well-known books, “George’s Secret Key to the Universe” gave children the idea of Hawking’s concepts about space adventures.

Despite of his medical condition (amyotrophic lateral sclerosis), Stephen himself never gave up sharing his blessings to the world of space science.

Considering the theory of general relativity and gravitation, his context inspires many young physicists to generate mathematical studies under cosmology. Whether quantum gravity or the black hole speaks per se, Hawking’s credibility holds the greatest achievement of a lifetime.

One thought on “Interesting Facts about Stephen Hawking”