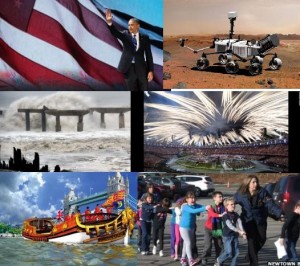 The world bade  farewell to 2012 with hope that 2013 would bring a brighter outlook and promising future for mankind.  The past year has been interesting and challenging considering the momentous events that happened not only in this planet but also in the outer space.

Yes there were victories, success, celebrations and discoveries but on the other hand, there were also defeats, failures, mourning and tragedies.

We have compiled some of the interesting news stories from the year that was… 2012.

The cruise ship Costa Concordia capsized off the coast of Italy with a death toll of 30.  Costa Concordia tragedy can never be easily forgotten; dubbed as the modern titanic, the sinking of this cruise ship easily became one of the newest big ocean tragedy of this year.

The famous pop-singer Whitney Houston was found dead in the bathtub of her room in the Beverly Hills Hilton Hotel. She died at the age of 48 due to accidental drowning.

The Diamond Jubilee celebration started on this date in London to mark the 60th year of Queen Elizabeth II as the ruling monarch of the British Empire.

Twelve people were killed and 58 were injured in a mass shooting in Colorado. The gunman opened fire in a theater during the screening of the Batman movie ‘The Dark Knight Rises’.

Queen Elizabeth II declared open the Games of London in a spectacular opening ceremony which showcased British history, music and literature. Over 10,000 athletes from 204 countries converged in the historic city of London to rekindle the passion for Olympic glory.

The world started to receive photos from Mars when NASA’s Curiosity rover landed on the red planet. It’s the most expensive and most ambitious Mars mission ever. Curiosity was sent out, trying to break all the barriers that have kept the Earth from getting nearest to its neighbor planet on the solar system.

Apple released their popular handset the iPhone 5 with a more enhanced camera, processor and data speed.

US President Barack Obama was re-elected for a second term defeating Mitt Romney of the Republican Party.  In his victory speech, President Obama said, “We are, and forever will be, the United States of America. And together, with your help, and God’s grace, we will continue our journey forward, and remind the world just why it is that we live in the greatest nation on Earth.”

The death toll from the strongest typhoon to hit the southern part of the Philippines had risen to more than 1000 with around 800 people still missing. Typhoon Bopha (locally known as Typhoon Pablo) left thousands of Filipinos displaced due to severe damage to property, infrastructure and crops caused by flash floods and landslides.

A total of 26 people including 20 children died in a shooting attack in Connecticut.  The massacre happened in the two classrooms of Sandy Hook School in Newtown and lasted for few minutes. The ages of the slain children were between 6 and 7 years old. The attack is considered to be the second deadliest school massacre in the country’s history.

Shinzo Abe has recently been elected as the 7th Prime Minister of Japan. He will serve the country for 6 ½ years with a mission of overcoming the current economic crisis.

The north eastern part of the United States was hit by a winter snow storm just after Christmas with at least 16 people reported dead and thousands of passengers stranded due to the cancellation of more than 1000 flights.