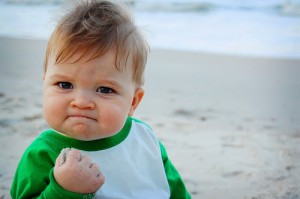 Everyone of us went through several essential growth & developmental stages. The second stage is known to be the most energetic phase (toddlerhood), full of excitement, curiosities, and learning, as they become increasingly aware of their environment. They also exhibit some sort of independence, doing things on their own.

Sometimes they have difficulty saying the right word and they get frustrated. They’ll start screaming, yelling, kicking and sometimes pinching to get your attention – throwing his temper tantrums. Another sign of tantrum and might be the worst are throwing everything all over the place or bumping his head against the wall every time they get frustrated.

For a long time, psychologists with the help of some parents have come up with some recommendations that would lessen children’s problem of throwing tantrums.

1. Frustrations. This is the common cause of children’s tantrums. It happens most of the time in public places. This happens if a child wants to say he’s hungry but can’t speak it quite right which can be a bit frustrating for him. Also, pointing to something he likes (a toy, for instance), and parents refusing to give it may trigger children’s tantrums.

2. Embarrassment. Tantrums occur when toddlers are embarrassed in front of their classmates or playmates. Even if it’s just a joke, he might take it seriously and could result to tantrums.

3. Anxiety. When parents have fights while children watch them, feelings of anxiety could result to tantrums and exhibit signs such as yelling, screaming or hurting himself one bumping his head to the wall, or throwing something around.

Based on the above reasons, here are some tips on How to deal Child’s Tantrums:

1.  Try to listen and understand what he wants. Since he could not speak very well, his actions can tell you exactly what he needs. Try to explain to him the things you cannot afford.

2.  Never raise your voice or get angry to him quickly when he makes mistakes especially in front of his playmates. Let him explain what he did and tell him calmly that it’s wrong.

3.  Praise him every time he does well. Children like being the center of your attention. It makes them feel proud and loved.

4.  Every time tantrum starts, try to distract or divert the child’s attention to something interesting for him.

5.  Realization of the moment for parents is needed. Sometimes children throw tantrums as a way to test your limitations. Stay calm. If you lose your cool, they would think that you are out of control and make them feel that it is alright to throw tantrums anytime they want.

Parents should avoid having fights in front of kids. Conflict with both parents can be seen as a bad example. Parents more than anything else are role models for their children. The more they see this kind of attitude, the more often they feel anxious when the both parents are around, and they might grow up with a bad temper.