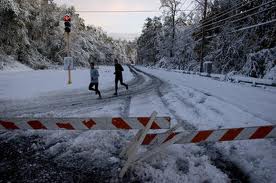 A rare snowstorm hit U.S.  Northeast over the weekend and has caused major damage to electric infrastructure across six states. About a million people are still without power due to the widespread power outages and utility crews are still struggling to restore electricity to the affected areas.

The storm was accompanied by howling winds and has covered cities with snow reaching up to 42 inches in some areas. The affected states are New Jersey, Connecticut, New Hampshire, Massachusetts, Pennsylvania and New York. The death toll has now reached 15 and an emergency was declared in New Hampshire and Connecticut.

Interesting Facts about the Northeast Snowstorm