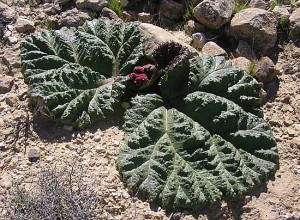 There is a unique plant found only in Israel and Jordan that has the ability to water itself and survive the extremely dry climate in the deserts.  This rare plant is called the desert rhubarb (Rheum palaestinum) and was discovered by reasearchers from the University of Haifa at Oranim,  Israel.

It has wide and broad leaves that measure up to one meter in diameter and have the ability to collect rain water which is then channelled to its roots. Unlike the other plants, the desert rhubarb can store water more than 16 times than what other plants can do. As a result of the plant’s “self-irrigation” process, it can live and grow in areas with scarce rainwater.

The scientists also studied the large rosettes leaf of the plant. They were able to identify similarities to the topography of the mountainous regions which allow water to flow through the mountain slopes down to the valleys.  The surface of the leaf of the desert rhubarb plant has also “grooves and notches” and wax covering.  This morphology of the leaf maximises the water flow to its roots helping it to be self-sustaining to survive the conditions in the arid land which no other plants can do.

Life in the Desert

Why Leaves Fall in Autumn?

What to do in Spring Time?

One thought on “Self-watering Desert Plant”