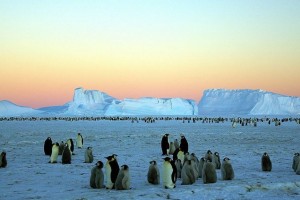 In July 2013, one of NASA’s satellites has found an unusually large crater on Antarctica’s surface.

Scientific studies revealed that craters are formed in this continent when the lakes of fresh water below the thick ice sheets are drained.

Between 2007- 2008, six cubic kilometres of water was reported to have flowed and drained a lake in the Antarctic. This was recorded as the world’s largest flood water due to ice melt and lake drain. It also caused the formation of the vast crater on the empty lake as detected by the satellite radar.

The rapid ice melt in Antarctica is believed to bring significant impact on the climate around the world.

With the changes in water flows from the melting ice caps, the world oceans particularly those in the southern regions, become warmer and salty. According to authorities, those changes in the Antarctic region and Southern Ocean are the significant drivers of climate change.

In October 2012, it was revealed in that “AUSTRALIA’S $46 million Antarctic airstrip is melting”. As a result of this, there is study to search for another air link to this icy continent.

The surface melt of the Wilkins strip is due to the huge amount of net loss of ice in Antarctica and this has affected the runway’s usability.

The runway is near the Casey station, the permanent base managed by the Australian Antarctic Division. This air strip has been carved into ice and is located on the northern side of the Bailey Peninsula.

According to Professor Andrew Shepherd from the University of Leeds in the United Kingdom, with the “accuracy of our data set, we are now able to say with confidence that Antarctica has lost ice for the whole of the past 20 years. In addition to the relative proportions of ice that have been lost in the northern and southern hemispheres, we can also see there’s been a definitive acceleration of ice loss in last 20 years. So together Antarctica and Greenland are now contributing three times as much ice to sea levels as they were 20 years ago.”