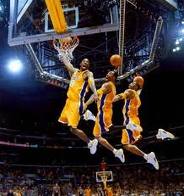 Basketball is a well-liked sport in North America. One of the major sports leagues is the National Basketball Association (NBA), and the members are the USA and Canada. In the past years this sport had grown all over the world which is the reason why everyone is interested in this sport.

The famous  players of NBA

Hear are some of the very popular players who made it to the best of their effort and strength to prove that they are capable of being on the top of their career.

Watch this video of Tracy McGrady uploaded by BMACPOLAND1 in YouTube:

One thought on “NBA Top Players”